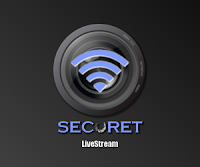 SECuRET LiveStream's main function was always to stream video and audio from the Android device's camera to be viewed in a web browser.  However, because the live stream is presented in the web browser using Java applets, it means that some browsers (those that don't support Java applets) are incompatible with SECuRET LiveStream.

So now when you launch SECuRET LiveStream and press the Start button, you are presented with the choice to stream to a web browser or to another Android device.  Selecting to stream to a web browser gives you the same instructions as before, but streaming to another Android device gives you a new set of steps to follow.  Now these steps are pretty clear and there's not much scope for me to make them any clearer, but some people are having difficulty so I will elaborate on them here...

2) Make sure both devices are on the same network, then start SECuRET LiveStream on the transmitting device, press the Start button and select to stream to another Android device.  Keep the resultant popup on the screen or note down the settings.

4) Then in SECuRET SpyCam, return to the start screen and make sure you select "Remote Camera" instead of "Built-in Camera", then press the Start button and if you have done everything above correctly (and your network doesn't have any funny configurations on it) then you will be live streaming from one Android device to another!

Now, inevitably some people will have difficulty getting this to work as anything that uses a network as part of an architecture can be susceptible to external influences that prevent it from working.  For example, my Motorola Xoom tablet has a terrible problem with WiFi connectivity and even though it reports as saying it is connected to the network, no actual communication occurs with the network.  So when you follow all the steps above and nothing works it would be easy to point the finger at the SECuRET applications in this case; but it's actually Motorola's fault for designing a shoddy WiFi implementation!  So my point is, this does all work and it works incredibly well, but if for some reason you can't get it to work after following all the steps above correctly, then the fault lays elsewhere.  And if you do come to that conclusion then please feel free to email me and ask for some support and don't run off to leave some factually incorrect review and nonsense low rating that will help nobody at all ... I'm sure that after bouncing some ideas around we can get to the bottom of your problem :)
Posted by dooblou at 05:22