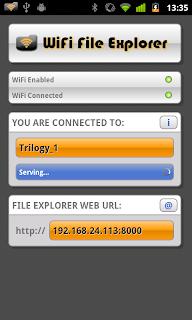 With the imminent arrival of mine and my partner’s first child (it could literally happen any minute now – already 2 days overdue), I have been very busy coding away like a man possessed to try and cram as many new features into my Android applications as possible. You should have already by now seen the latest new feature in SECuRET LiveStream (real-time audio streaming to go along with the video; pretty freaking sweet!), but there is so much more in the works...

First of all, the next update you will see to the SECuRET apps and GroovyCam LiveStream is that I have fully updated all the settings screens to use the standard Android convention; that is to say that all the settings will now appear using the same layout and style as you see in the actual Android OS settings menus and other applications that also follow the convention. This not only makes my applications feel more familiar and in-line with Android, but hopefully makes the whole experience of configuring my applications more professional, pleasant and straightforward (even I was finding it confusing to configure SECuRET SpyCam in particular!!)

I have also jigged a few settings around and set dependencies to disable things that can’t be set based on other settings, to make everything more obvious. There are also some helpful hints scattered throughout and I really think the whole thing is much easier to use and understand ... hopefully it will result in less emails from people asking me how to do things ;) Also the menus, dialogs, text and popups have also been reviewed and standardised in many places to make the whole experience feel more professional and uniform with other top applications on Android.

The next thing of note is that I have been busy refactoring all my code and just giving it a general tidy up (it’s amazing how out of control it can get when you take your eyes of it :P). I am also making use of my own custom libraries to manage common code between my different applications; this is making some real savings already and I wish I had done it sooner – it means my applications can easily be updated across the board when making little tweaks to the code they share and new features suitable for all the applications can be added with ease. It’s particularly useful for SECuRET/GroovyCam LiveStream and WiFi File Explorer as they share oodles of similar code and now I can manage it all in one location. At the same time as all this is I am finding areas where I can speed up code and make it more efficient, so for example, the frame-rate in SECuRET LiveStream is now absolutely flying – even in hi-res mode! So this may warrant an update, and even though you may only notice slight improvements, it’s important for ease of future development.

And finally, the next big thing I am going to start work on is a major overhaul of the UI for all my applications. The screen shot above is how I have WiFi File Explorer looking right now in development – shiny isn’t it? :P The logo and title will probably change as well as some more tweaks I would think, but it will pretty much look like this to all you guys soon enough. I intend to make similar style changes to all my other applications as well – it feels like a good time to put some real effort into the UI as the feature sets of all my applications have settled down now and I can justify spending time on applying some makeup to them.

But it’s not just the UI of the actual applications themselves that will see a fresh lick of paint ... also the web UI of WiFi File Explorer is due a massive makeover as well! About time too, after a couple of months of you guys having to sit through boring localization updates of WiFi File Explorer – sorry about that ;) I have an old school friend of mine currently beavering away on a fresh new interface (web UIs aren’t my forte and he has several years commercial experience knocking out tasty looking websites) and I am hoping to integrate his work into my code very soon. I haven’t seen what he has done yet, but his sketches were perfect and include a lot of the features you guys have been asking for.

I’m sure there’s more I have planned, but I can’t remember it now (something about Honeycomb and a new application I am working on, maybe ;) ) ... but there’s certainly enough to look forward to there! Now, I just have to find the time to do it all in between nappy changes and being puked on!!

Right, back to staring at my phone and waiting for the phone call ...
Posted by dooblou at 06:23