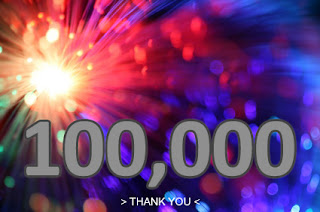 Over the weekend I managed to pass another massive milestone on the Android development odyssey on which I embarked almost 3 years ago now... as the title and picture imply, I have now managed to sell paid apps (i.e., people actually parting with money!) to the tune of 100,000 units.  And that's just on the Google Play Store - my apps have sold thousands of copies on the Amazon Appstore, SlideME, AndroidPIT, GetJar and even on BlackBerry App World!

Not quite sure how I got to this landmark and I feel very lucky.  Actually, I do know how I got here, and it wasn't just dumb luck; spending hours of my free time coding away and answering support email after support email at every hour of the day... basically, blood, sweat and tears.  But it's not all bad of course, I've had lots of fun along the way and had the chance to meet some fantastic people who have really helped me out... and a lot of the time they do it for absolutely free.

So what now then?  Press on to chase the next 100,000 sales?  Errr, no thanks!!  As fun and rewarding as it is, the stresses and the pressure of dealing with so many users is not something I really want to have on my shoulders - this is all in my spare time still and I have a full time job and parenting responsibilities to consider.  Checking comments and reviews everyday, looking at my sales statistics, dealing with users that have no right to own a "smart" phone... I am trying to share some of those responsibilities, but still, these are all things that have taken over my life and my free time, and I quite frankly would like my life and my free time back.

And I have already started distancing myself from it for the last few months.  If you have one of my apps, then you have probably noticed that rather than an update every couple of weeks, it's now more like every couple of months.  I also don't (or rarely) obsessively check the comments and reviews for my apps any more - although the majority of them are good, the needlessly abusive ones are just not worth even looking at.  I also have no idea where my apps sit in the charts now, whereas before I would check it pretty much daily.

So I haven't exactly quit - I still support the apps and I have just released a load of cool new features (with some more to come in a couple of weeks)  - but I am certainly sitting back and letting the hard work I have already put in propel it all from now on as it starts to tail off.  I have achieved and experienced more than I had hoped for already, so put it this way, I wouldn't be (too) upset if it all stopped tomorrow...

... but it won't, and this Android stuff can be dangerously addictive.  I hope to receive the new Nexus 7 in a couple of days and I may end up getting a whole new wave of motivation when I get that in my hands.  I am also working on a couple of genuine business opportunities based on the technology in my apps that is away from the model of selling them on app stores, and this is certainly where I have a greater interest now and is where I will focus my energy.  They may fizzle out to nothing, and I get contacted all the time about possibly using something I have written in some fantastic new Android-based product, but the projects I am working on at the moment seem to have real potential... and even if they do fizzle out, it's actually pleasant to be doing some work which isn't rated on a scale of 1 to 5 stars for once!

There's also a project coming up in my full time job where I will need to develop a fairly complex Android app, so it all seems to have been beneficial and worthwhile learning how to develop Android apps in the first place.  So although I am winding down my activity with selling Android apps for a handful of pennies on various app stores, it certainly looks like green robots are going to be entwined with my professional and personal life for a good while longer, be it playing with my new Nexus 7 or writing apps in my real job.

And all this because I decided one lunchtime, in an unusual rush of motivation, that I should stop wasting time reading gadget websites and actually try doing something for myself.  Who'd have thought it, eh!?
Posted by dooblou at 05:22