I sometimes forget that even though many people praise WiFi File Explorer for its simplicity and ease of use, it can actually be pretty confusing and daunting for some people to understand.  Things are only easy when you know how, so let me explain the basics behind the app so users of all abilities can make use of WiFi File Explorer.

Usually, to manage the files on your Android device (like copying photos you've taken to your PC or transferring some MP3s to your phone), you would dig out your cable and plug it into your PC.  In essence, WiFi File Explorer lets you accomplish this but without the cable!

You start by ensuring that your Android device and the PC you want to transfer files to/from are both on the same WiFi network, for example your home WiFi network.  Once they are, simply start the WiFi File Explorer app on your Android device and assuming you are connected to a WiFi network it will popup a message that gives you a web address to enter into a web browser.  At this point, go to your PC on the same WiFi network and enter that web address into your web browser (Internet Explorer, Chrome, Firefox, etc).  Make sure you enter this address exactly as the app tells you and ensure you enter it into the address bar, not into a search box. 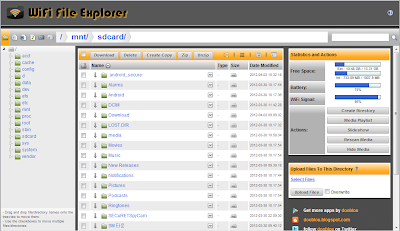 Once you have done this, you are presented with a web page (like the one in the screenshot above) that lists all the files and directories on your Android device.  It is a pretty familiar concept to the one you are used to in other file managers such as Explorer on Windows, so it should be fairly intuitive how to use it.  As it is a web page, to transfer files from the Android device to the PC the term ‘download’ is used, and this can be achieved by either clicking the arrow to the left of the file name you want to transfer to your PC or by clicking several check boxes of files you want to transfer and then hitting the Download button.  Files are then downloaded to your PC just like when you download a file from any other web page and they are stored in the downloads directory of your PC or wherever your web browser usually saves downloads.  Conversely, to transfer a file from your PC to your Android device the term ‘upload’ is used, and this can be achieved by using the upload box to the right of the web page.  Simply select some files to upload from your PC and hit the Upload button to transfer those files to the current directory of the Android device you are viewing on the web page.

So once you have got to grips with this basic method of transferring files it should be fairly easy to work out how to do other things, like deleting files, creating new directories, moving groups of files around.  Then you can dig into more advanced features, such as setting music files as ringtones, viewing a slideshow of pictures, installing app files and setting your Android device’s wallpaper.

Finally, just to explain how the app technically works if you are interested... It actually works by setting up a small web server directly on your Android device.  This web server is confined to only the WiFi network you are on and can only be accessed by people that know the web address it is using; so don’t worry – it is NOT a publicly accessible web site.  You can also go into the app settings and set up a password to make it even more secure.  So when WiFi File Explorer gives you a web address to enter, that web address is actually made up of the IP address and port number of your Android device on your WiFi network.  And then when you connect to that web address via your PC web browser, you are connecting directly to the small web server running on your Android device (no external servers used at all and all the data is local, so you don’t get charged for any data usage).  This is presented as a set of web pages that allow you to manage your files, which is WiFi File Explorer!

I hope that helps people get into WiFi File Explorer and to understand a little about how it works so they can safely and efficiently use the app to manage their files without the need of a cable.  And please do not hesitate to email me with any further questions about the basics (or advanced features) of WiFi File Explorer.
Posted by dooblou at 07:45 49 comments:

Some WiFi File Explorer users are finding that they experience some unexpected errors when using the app on the Toshiba Thrive Android tablet, particularly when uploading a file to the external SD card they receive a “Server I/O error” and the upload fails.  This also applies to some other devices as well, such as the WiFi US Motorola Xoom and hopefully I can use this post to explain why...

Update: I have been informed this post also applies to the Samsung Galaxy Tab 7.7.

Many Android devices today have both internal flash memory for data storage and also an external SD card to extend that amount of storage.  Most of the time, both these areas of storage have full read and write access and so using WiFi File Explorer to upload and manage your files is no problem at all.  However, in the case of the Toshiba Thrive and WiFi US Motorola Xoom, the SD card is actually read-only when it is mounted in the device.  This means that apps can read from the SD card quite happily, but whenever an app tries to write to the SD card it will cause an error.  Fear not though, as the internal flash memory is still writeable, so you can fully utilise WiFi File Explorer with this area of storage.

So because of this, it means features in WiFi File Explorer like uploading, copying and moving files (basically anything that requires that the SD card be written to) will not work when attempting to do so on the external SD card.  In the case of the Toshiba Thrive there is one exception to this in that only the file manager app that comes pre-installed on the device will actually grant write access to the external SD card.  So there is a workaround in that you can upload a file to the internal flash memory using WiFi File Explorer and then use the pre-installed file manager app to move the file to the external SD card – a bit or a pain, but it works!

At the time of writing, I don’t know any other devices that suffer from this problem, but please leave a comment below if you discover any to inform other users.  I believe that by default in Android this is how Google have engineered it (hence why the WiFi US Motorola Xoom suffers from the problem as it is a Google Experience Device) because they have always envisaged Android devices only needing one area of main storage that needs to be written to by apps, but obviously other device manufacturers have had different ideas.  It may change in the future via an OS update (surely Toshiba will address this with the Thrive as I have seen lots of complaints about this in various forums), but for now this is how it is.
Posted by dooblou at 06:53 17 comments: